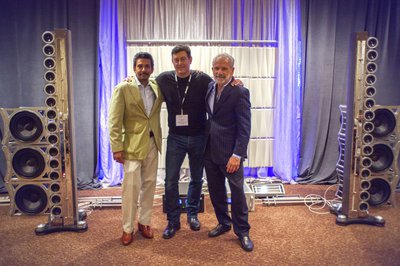 Axpona is the largest home audio/video show in North America by far featuring hundreds of the most cutting-edge audio and video manufacturers in the world. I help run the room every year, and amongst this competition, the Scaena Loudspeaker room was cited as best in show in 2022 by several sources, including the audio review magazine The Absolute Sound. Here's what Robert Harley said about the Scaena loudspeakers:

But this isn't just a one off win against the world's best competition, in 2016 we won as well, see the The Absolute Sound and Dagogo.com as just two examples of the best-in-show accolades. Outreach A/V carries the Scaenas because their speakers bring  you closer to live music than any other I've heard. They transport you to the venue or studio.. The system is scalable to hit different price points and function in different-sized rooms. There are all kinds of big box speakers out there in the same price range, but none do what the Scaena's can.

Read more about them in the audio section of the site. Come by for a listen -- I think you'll be floored by the sound.