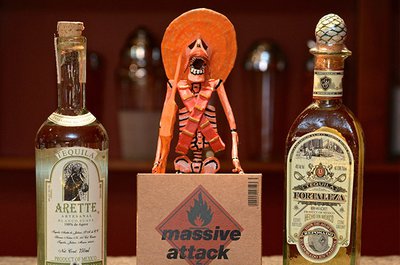 There are other sites for this (I’m told)

In heavy rotation at Outreach these days:

The National - High Violet
May take a listen or two to take hold, but this is a stirring, even profound album. This Brooklyn band both wowed Letterman with the intensity of it’s performance on his show. As a father, I know exactly what lead singer Matt Berninger means on ‘Afraid of Everyone’ and ‘Runaway’. Only wish the sound quality was better with less compression.

The XX - ‘XX’
Spare, catchy, with an emotional range of bouncy to moody and beautiful. Addictive stuff -- their latest album ‘Coexist’ continues on this distinctive path.

Hacienda Brothers - ‘What’s Wrong With Right?’
Like the greatest bar band you ever heard. A mix of rock and blues with a tinge of TexMex country. Authentic americana to the core and a good recording to boot.

Leonard Cohen - Live in London
Lyrically and musically just brilliant -- good sound quality too. An adult good time, the DVD is worth a look as well. Mr. Cohen, is funny, engaging, and the music (and he) surprisingly spry. You have to smile when addresses the O2 arena crowd:  ‘It’s been a long time since I stood on this stage in London, it was about 15 years ago, I was 60 years old, just a kid with a crazy dream.’

Massive Attack - Blue Lines (remaster)
Still influential, one of the defining albums of the trip-hop movement, but much more than that. Ranges from beautiful, dramatic female vocals with a beat background to hypnotic rap-like tracks. ‘Unfinished Sympathy’ is epic among many epics here. Super catchy, and now sounding better than ever. Outreach Remaster of the Month. That’s big time.

Pink Floyd - ‘Wish You Were Here’ (surround mix)
For Floyd fans with surround setups, this is a must. A super-cool way to experience the album that feels totally in-line with the material. Get the stereo remaster if you lack surround but love PF. Much better audio quality than the disappointing ‘The Wall’ remaster released last year.

Wilder Napalm
What you get when you cross a Vince Gilligan (Breaking Bad, X-Files) script with the creator/director of Moonlighting, the TV show that broke Bruce Willis. A funny, charming, offbeat yet emotionally true triangle between brothers (Dennis Quaid, Arliss Howard) and the girl (Debra Winger), spun by the fact the the brothers have the power to set fire to things with their mind.  Jealousy can get pretty heated.

Out of Sight
Not a great movie -- it doesn’t reach that high -- just merely a perfect romantic thriller. George Clooney and Jennifer Lopez have legit chemistry as an ex-con and Fed respectively, and vivid, entertaining supporting perfs from the likes of Ving Rhames, Albert Brooks, Michael Keaton, Steve Zahn, et. al. Funny, sexy, occasionally tough-minded, and great-looking -- the best Elmore Leonard adaptation next to the nastier 52 Pickup. Great score too by David Holmes.

Small Change
The most magical yet natural movie ever made about kids courtesy of Francios Truffaut.

Empire of the Sun
If anything Spielberg does can be considered underrated/under the radar, this is it. Based on J.G. Ballard’s semi-autobiographical book about growing up in a Japanese prison camp in Shanghai, this is classic, beautiful storytelling. Christian Bale of Batman fame is amazing as the boy separated from his parents, forced to grow up too soon. First rate cast includes John Malkovich and Miranda Richardson. Great to see this released on Bluray.

So I Married an Axe Murderer
Bombed at the box office because it wasn’t what people expected from Mike Myers. Sophisticated in tone and execution, it’s both hysterical and romantic. Great premise has Myers as a commitment-phobe who meets the seemingly perfect woman (Nancy Travis), but begins to suspect she’s, yeah, an axe-murderer. His friends think he just running from committing as usual - the audience is kept off balance as to the truth. Highlights include Myers playing his character’s Scottish father -- ‘Head! Pants! Now!’

The Journey of Natty Gann
An all-time great family movie that Disney has apparently forgotten about. Meredith Salenger is a depression-era girl who journeys across the country to reunite with her father. Along the way, she befriends a drifter played by John Cusack. Great story and sense of time and place.

Full Contact
Enough of the family stuff -- here’s a great, gritty action film that totally nails the comedy/thriller thing where most fail on both counts. See why Chow Yun Fat was the biggest international star of his time. Just badass.

If you’ve only had Cuervo Gold, you haven’t had real tequila. The label must say ‘100% blue agave’, meaning it’s only made with the blue agave plant and water. CG is about half agave, and half other (cheaper) stuff. Last bit of unsolicited advice:  don’t assume anejos (aged more than a year) are better than unaged blancos or reposados (aged less than a year). More aging takes tequila closer to a woody scotch flavor, the agave flavors can take a backseat. And agave is what makes tequila unique.

In heavy rotation here at Outreach:

Fortaleza
Made the ‘old way’ -- stone paddles to mash the blue agave plant rather than mechanical presses, no water sluiced through that dilutes the product. This is tequila rustica,  you taste the plant, the earth, and the sweat that went into making it. There are slightly smoother tequilas out there, but those lack the complexity of flavors found here.

Chinaco
The tequila that turned me on to tequila. The reposado hits notes of vanilla, butter and spice -- if you’ve never had a good tequila before, this is a great place to start. The taste of quality.  Nice explanation too on the site about how tequila is made.

Arette
The artesenal series is mind-blowing stuff. Rich, fruity, almost sweet, but with a solid kick in the pants that plants your feet on the ground. Pushes the envelope on what tequila can be.